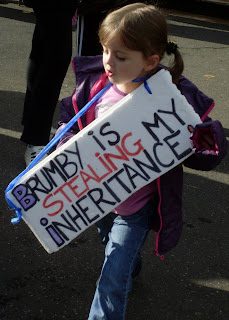 I attended this Rally when, at the last minute, others could not . Resident Peter also attended.

It was well presented although where I was I could not hear Mary Drost's presentation and only parts of Rosemary West's.

Signs had messages such as get off our democracy but I think this one says it all:


Comments and requests from other presenters were:

Loss of privacy, sunlight and safe places for children to play. The denial of fundamental rights of people to protest.

Give us our rights we demand to be heard.

If you run rough shot over the people they will come back to bite you.

Give the community a voice and give us planning laws that give us a community.

We have the right to protest about things that matter to us.

We can conform, consume and not be heard. If this happens it leads to disengaged people and possibly depression.

There were many councillors and even one from Brimbank apparently! Helen Harris from Whitehorse Council, who I know well so could recognize, was there and others from Banyule, Port Phillip. I didn't see anyone from Knox but I certainly couldn't move around easily because of the crowd.

Matthew Guy, Shadow Minister for Planning made a lively speech and there was a bulldozer that knocked down some paper buildings, a petition presented, and lots of people from Wonthaggi who were protesting about the Wonthaggi Desalination Project.

At a local level I thought about what one resident had said at a PCC Meeting; she wanted to be able to keep the house she had, raise her family and be able to go to her clothes line in her underwear in the privacy of her own backyard.

For me that sums it up very well.

I caught up with both Mary and Rosemary and unfortunately was about to speak to Matthew but he was called away.

A View of the Rally 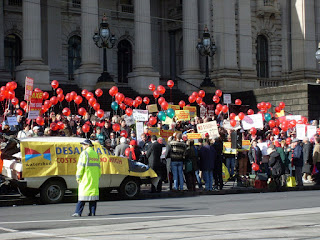