Tonight at 5.30pm two questions for tonight’s council meeting were faxed to Knox City Council Offices, but somehow they were lost, misplaced or pigeon-holed due to their controversial nature. The fax machine from which they were sent provided a message stating they had been sent successfully.

These are the questions:

Knoxfield residents congratulated council on the action taken in the budget to study the unique character of Knoxfield’s indigenous canopy trees. I’m seriously concerned, though, that if the felling of trees by developers continues as in No 75 Kathryn Road, there will not be any trees left to study. 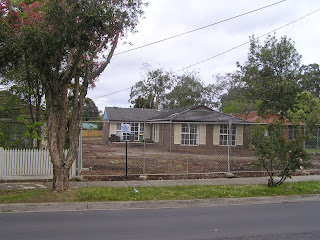 A moratorium on granting planning/building permits needs to be instigated immediately to save existing indigenous canopy trees.

Shaun Leane, MP, recently wrote to the CEO, concerning a moratorium and stated,

“I have been advised that in keeping with the Planning Act, the protocol is a formal request in writing from the council is required if council deems it appropriate to involve the Minister.”

A precedent exists for the Minister to grant a moratorium, as witnessed in Seaspray recently,

Therefore, following advice to council by Shaun Leane, MP, does the Council intend to request the Minister for Planning that a moratorium on granting planning/building permits be imposed in Knoxfield until the study into its unique indigenous canopy trees is completed?

Following my question to the May council meeting requesting traffic count figures for , I was unhappy with the Director of Engineering and Infrastructure’s response, as he stated that according to traffic counts development had little impact on the most recent traffic count.

I followed this up with correspondence and the Director’s response to Knoxfield residents and to me dated 13th June 2008, was that the most recent traffic count for 2008 was 2,980 vehicles per day and stated this was a reduction on the previous year of 3,383 vehicles.

This statement inferred that traffic on was not a problem and could cope with further development.

In actual fact figures provided to Cr Field by the Traffic Engineer indicate the traffic count taken in May had increased by 630 vehicles on the Director’s figures.

Therefore, would the Director of Engineering and Infrastructure explain what the actual traffic count was for Kathryn Road in May this year, as he has stated they were 2980 vehicles, while 3610 vehicles were released by the Traffic Engineer to Cr Field and if these recent figures are correct will the Director agree that development in Knoxfield has an impact on traffic flows on Kathryn Road?